Letter from the Antipodes 7 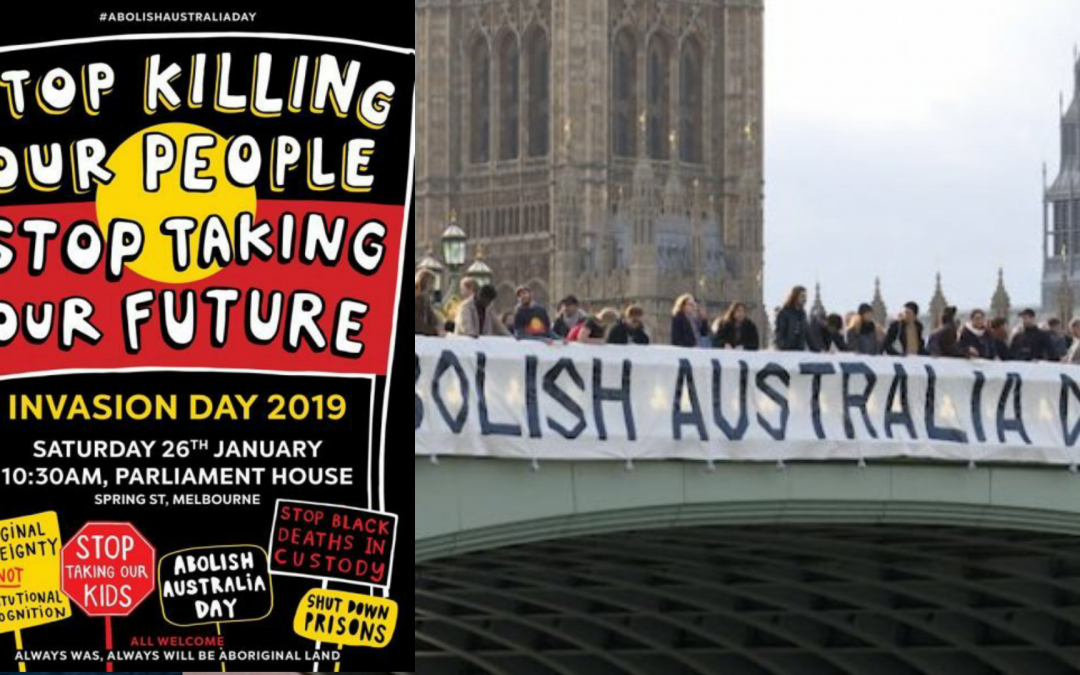 January is a traumatic month for Aboriginal Australians, and a growing number of non-Aboriginal people. The unique and often quirky Australian Christmas with its ‘tradition’ of cricket from the 26th December, has morphed into cringeworthy jingoism on the 26th January.

On the 26th January 1788 an Englishman raised the Union flag and declared this land British, and Terra Nullius. Britain started sending its excess prisoners here and Australia became a penal colony. In the 240 years since, white people have done more damage to this country than the first people who cared for the land (and themselves) exceptionally  well for more than 80, 000 years.

As the days grow closer to the 26th January trauma, sadness and grief are repeated yet the nation officially ‘celebrates’ its national day on the day that started systemic genocide and oppression of the original inhabitants.

They never ceded this land to the British. The land was stolen as all colonial lands are. And throughout those 240 years of white supremacy and privilege, Aboriginal people are dying and being incarcerated more than ever.

In 2020 the world heard of the Black Lives Matter movement, but Aboriginal Australia had been protesting black deaths in custody in Australia for decades.

Despite a Royal Commission into Black Deaths in Custody, and a very public ‘Sorry’ speech by former Prime Minister Kevin Rudd[i] as he departed office, black deaths in custody have increased.

Since the Royal Commission in 1991, there have been 431 Aboriginal deaths in police custody, some have been children[ii]

Australia is the only country in the world that jails 10-year-old children…only Aboriginal of course. Those children have either done nothing, except to be black, or have stolen some trivial item just as white youth do (but there are no white 10-year-olds in jail).

The Australian Prime Minister, Scott Morrison, is not recognised for being a compassionate person in general, but his attitude to Aboriginal Australians hit an all time low in the weeks leading up to Invasion Day 26th January.

Firstly, he approved changing one word in our national anthem[iii], quite a big task for any country, even if you have a terrible anthem. ‘young and free’ was replaced with ‘one and free’ supposedly in recognition that Aboriginal people have been here for at least 80,000 years so we are not young. [iv] The problem is the new word is still wrong. Until Aboriginal deaths and Aboriginal people have the same life span as the rest of us and many other serious issues are fixed, we are not ‘young and one’ at all.

Convict descendants have generally accumulated land, assets and significant position (white privilege for sure) since their ancestors arrived. The opposite has happened for Aboriginal Australians.

At the same time, the P.M. criticised Cricket Australia for its decision to remove the words ‘Australia Day’ from any advertising of its cricket matches this week, and all cricket players will war Aboriginal shirts. Morrison told Cricket Australia to not politicise sport.

He then later allowed his ‘Australia Day 2021’ awards to ‘leak’ and when it was heard he was planning on giving a second award to an ex-tennis player who has significant public homophobic views, he was politicising sport.

This may give you some idea why this date 26th January is increasingly political. The movement to either abolish or change the date is becoming political and controversial.

What must change is not perhaps the date but Australia. We need to have open conversation about why a growing number of Australians do not celebrate ‘Australia Day’.  Our schools must be open and transparent about the true history of this country. Children must grow up knowing what 240 years has done to the original people and this beautiful land.

Change always takes a generation or two, and there is change coming…we just need a leader who stands by our strong and proud Aboriginal communities.